The stunning curved feature blocks of Waterside, incorporating stone-clad and glass facades, sit reflecting in the water features within the spectacular landscaped grounds before them.

In 1993 the first phase of Citywest included the excavation and transfer of soil from the Tara Lake to the embankments of the bridge, which was then shaped into a wooded hillside from which the bridge now emerges. At the base of the hillside two lakes are fed by a stream with weirs and waterfall linking the Tara Lake with the Waterside Lakes.

This natural landscape cradle was then allowed to mature for fifteen years, to naturalise and to increasingly project an image of Citywest Business Campus as a Home for Business and a Home for Nature.

Then in 2008 the buildings of Waterside were designed and built into this lake and woodland setting. The development was built along a central axis which adopted a more formal garden style in contrast to the natural cradle into which the development sits, taking its imagery from the Islamic Gardens of Alhambra.

Waterside now stands in the high-profile location fronting the N7 Naas Road where it attracts admiring glances from thousands of passing motorists and becoming an iconic development.

In 2010 Waterside was awarded the prestigious Principal International Award by the British Association of Landscape Industries (BALI). 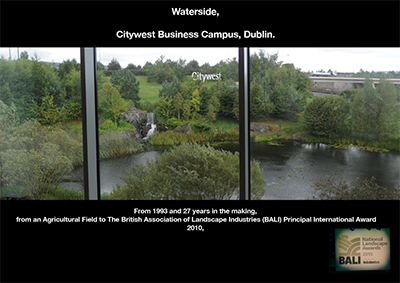 Click on the thumbnail above to view the PDF document.